Principles of the d-HDDR method (discovered in 1996)

Controlling the absorption and desorption speed of NdFeB alloy and hydrogen at a certain critical velocity can simultaneously miniaturize crystal grains and turn them anisotropic, resulting in superb magnetic powder.

Discovery of the anisotropic structure mechanism (2003)

In the reaction between the NdFeB alloy and hydrogen, first a 2-phase structure is formed with a lamellar structure of Fe containing supersaturated B and NdH. The ferrous phase has deformation in one direction caused by the lamellar structure and the Fe B phase is observed forming aligned orientation as a crystal to mitigate the deformation (figure on right). In the hydrogen release process, the Fe B phase is recrystallized and the orientation of the crystals is aligned. That is, the Fe B phase functions as a phase with memory of the orientation before the reaction. This unique metallurgical anisotropic mechanism is presented as a TM (texture memory) effect. 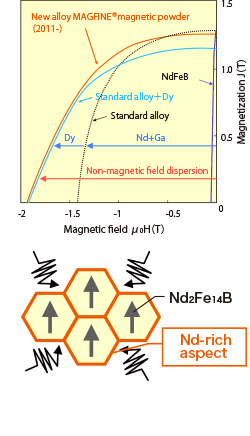 Up to this point, precious rare earth elements Dy and Ga were added in order to give the material heat resistance. We successfully created low-cost magnets by diffusing a non-magnetic powder into the grain boundary of the d-HDDR powder with a particulate size of 0.3 micrometers that gave the product a heat resistance of 150℃.